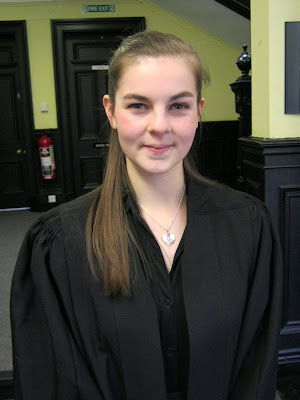 Afternoon all... hope you're all having a marvellous day and the sun is shining for you like it is for me.  Here's hoping that tomorrow is another gorgeous day for Brianna's graduation.  So today I took my first trip into Glasgow University to see Brianna being awarded her Edward Caird Bursary.  These were originally known as the Dean's Awards and there were only 5 BA graduants receiving awards for the whole year so we feel exceptionally honoured that Brianna was one of them.

In the words of the University..
"these awards are granted to support outstanding students in continued study at the University of Glasgow" 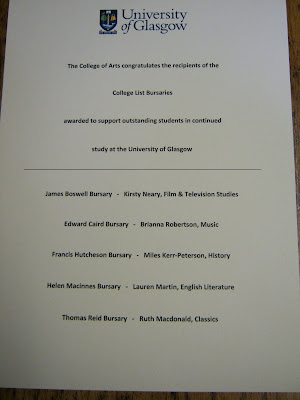 We were invited along for drinks in the Foyer of the College of Arts Office where Brianna was presented with here award by Professor Pittock, whom may I add was an extremely lovely gentleman.  Where after they proceeded to have their pictures taken by the Universities official photographer... Hence why my pictures are at odd angles as I had to sneak to the side of him along with the other parents. Thankfully Brianna was on the outside of the group and poor Professor Pittock has been caught in movement... lol.. So now that today is by with it's time to get everything organised for an even bigger day tomorrow... her actual graduation.. and I must remember to pack plenty tissues in my handbag.. I know I'm going to need them.   I'd have been over the moon just at her obtaining her degree.. but to obtain 1st class honours and a bursary award on top of that is simply awesome..

WELL DONE BRIANNA AND WE LOVE YOU MORE THAN YOU WILL EVER KNOW.

Must go now.. Mum has popped in to see the pictures... catch you all again later.

Posted by Lorraine Robertson at 3:10 pm

Well done to Brianna. What a lovely and talented girl she is. Hope you enjoy her graduation tomorrow.