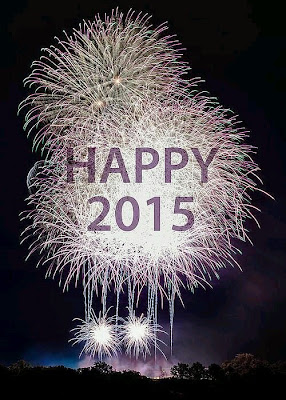 Posted by Lorraine Robertson at 11:45 pm No comments:

Well my dear friends near and far, the bells are almost here .

2014 has seen me reconnect with friends of old, form friendships with new and I've seen my friends suffer and celebrate too.

With 2015 almost here I have one wish for all of you.  I wish each and every one of you peace, joy and happiness.

Thank you for your friendship and madness from certain peeps too (you know who you are) lol.

Happy New Year to all
Xxxxx
Posted by Lorraine Robertson at 11:27 pm No comments: 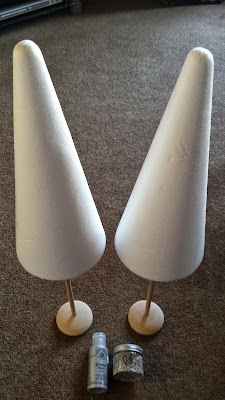 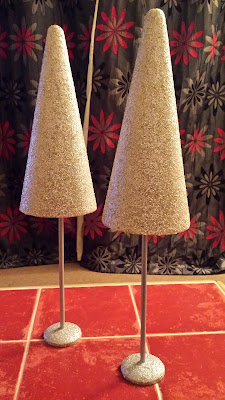 Just a quick post folks as it's already after 3am and the alarm is set to go off in 4 hours.

Felt good to be back at work today instead of stuck in the house but boy oh boy.. what a day weather wise.  I heard the wind, saw the rain and wouldn't be surprised if I simply missed  the hail as it's been torrential most of the day.

Tonight I've spent chatting with friends and my wee mum on the phone followed by the final construction of my wreath for this coming Saturday's workshop.

Anyway on to what was yesterday's make.  I started with 2 polystyrene cones, dowling rods, silver paint, mica flakes.

After adding a lick of paint, a coating of mod podge and a sprinkle of mica flakes before sealing with more mod podge I've now got another 2 sparkly trees to blend in with the ones I done last week.   Looks there's gonna be a lot of glitter around the house this crimbo season.   I can't wait!

On that note I'm off to bed in the hope the sandman visits soon. 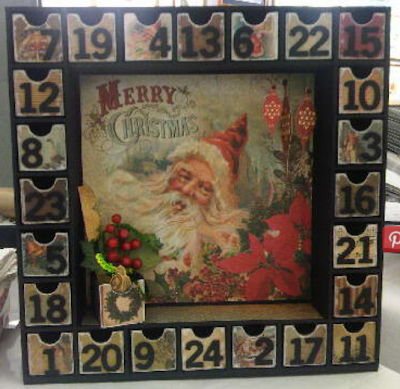 Well folks the old lurgy made a reappearance the last few days so I'm back to the Vicks de toilette and paracetamol again but the good news is I've managed a little bit of crafting.

You may or may not remember one of the advent calenders I made a few years back...  well its travelled around rather a few shops as well as being on display in the shop so it was looking a bit worse for wear.  Thankfully these KaiserCraft advent calenders are such high quality they can take the abuse so rather than having to bin it I've been able to start a revamp.   Black has been replaced with metallic gold, papers are new too (with exception of drawer fronts) and I've bought a couple of wee pieces to add for that Victorian feeling.

Full picture will be uploaded once it's complete but today I took a break and switched to playing with polystyrene cones.  Hopefully get that uploaded tomorrow if I can get a good enough pic.

So my time off work is over and I've hardly been out the house but seeing as I had to pop in the shop yesterday to pick up some supplies we took a wee trip down to Silverburn shopping centre (highlight of my hols lol).  We had a stroll about and picked up some stocking fillers as well as a trip to the Handmade Burger Co for some dinner.  The staff are always so pleasant & friendly in there.  Anyway the trip came to an abrupt end as my temp started to rise so had to get home and bump some more meds in me.  Thankfully I've another few days off next week again so can take another wee trip down then along with mum.

Well that's it all for now folks so will sign off and go get my hair straightened for work (I look like one of the hair bear bunch today lol).

Posted by Lorraine Robertson at 12:28 am No comments: 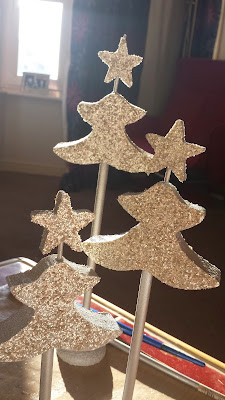 Afternoon all and eh it's been a while!  Didn't mean to disappear like I have but finished up work last Thursday for a weeks holiday and bam..  was struck down with a head cold or a flu on Friday!   Lovely start to my fully scheduled break eh.  I had so much planned from painting the house, Christmas shopping etc and what have I achieved?   Not a sodding thing, that's what.

Yesterday was the first day I could say I actually felt somewhat normal (no cheeky comments from those who know me lol) so a catch up around the house was required including a massive washing basket of dirty clothes.  Yuck!   Obviously the whole day couldn't possibly be centred on being domestic so I had a rummage in the craft room (first day I've even wanted to look at Craft stuff so I must have been ill) and found a set of 6 wooden trees that I had bought at a craft show about 3 years ago (hangs head in shame) and knew right away what I could do with them.
I wanted to keep them plain and simple but obviously they needed some sparkle and shine.. It is Christmas afterall lol.

After constructing them I added some snowtex to the base for texture then covered in metallic silver paint.  Next up using mod podge I covered the actual tree structure & star with luna silver mica flakes and a final coating of mod podge to seal it all.

So what's on today's agenda..  hhmmm I had mum bring me in a pile of supplies yesterday so this afternoon will be spent in the kitchen.  Good old Herman has been awoken from hibernation  so it's cake baking time.   Totally forgot about him till Hels mentioned him the other day and my brain went pop..  I've got him in sleep mode lol.

Now if you're a Herman lover here's a little piece of info that not every one knows as most people receive him off a friend and follow the instructions he comes with.   If you have a Herman and you keep him for say 2 weeks..  feed him & nurture him as prescribed.  After this you can actually allow him to go in to hibernation.   Simply place him somewhere dry with a tea towel on top and he will sleep.   To reawaken you simply feed him!   My Herman has been in hibernation for around a year as I'm not a big baking fan but I do love to gift cake to friends at this time of year.   Only thing to remember is make sure you give him one last feed before locking him away.

Anyway I'm off to do a quick clean up and decided if today's recipe is going to be apple & walnut or banana & chocolate chip lol.

Catch ya all laters and if anyone out there is suffering the cold or flu hope you get well soon.  My remedy was a mixture of paracetamol every 4 hours and my new fragrance..  Vicks de toilette 😉

Posted by Lorraine Robertson at 12:51 pm No comments: